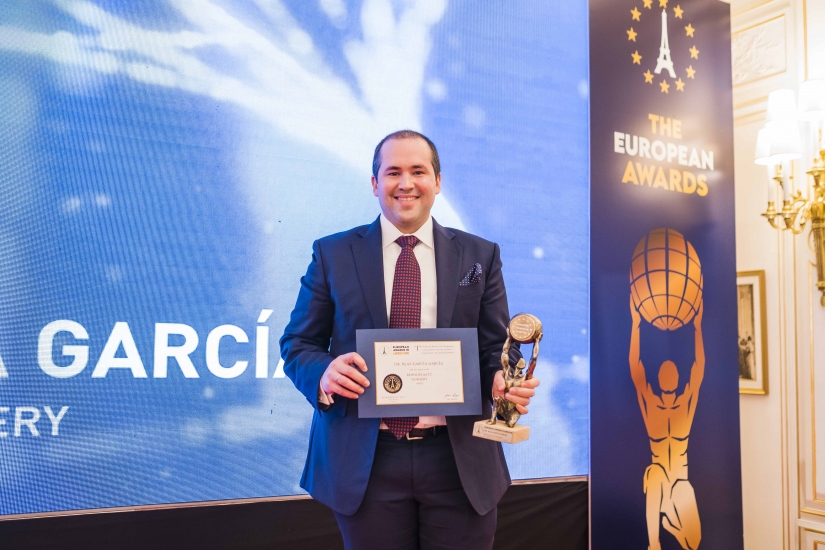 Dr. Blas García is an eminence in the world of plastic, aesthetic and facial reconstructive surgery. He graduated in Medicine from the University of Córdoba, finishing his studies earlier than planned with an outstanding grade.

He specialized in Oral and Maxillofacial Surgery at the Reina Sofía University Hospital. Since he began the specialty, he knew it was very necessary to train with the best specialists worldwide in facial plastic surgery and rhinoplasty surgery. He spent long periods during his MIR training in Florida, Mexico, Brazil, Los Angeles and New York, where he learned from the best and most advanced techniques in facial plastic surgery, in addition to this he did a Fellowship in Facial Plastic Surgery at the University of Maryland in Baltimore, United States. He finished the specialty of Maxillofacial Surgery with the National End of Residency Award to the best specialist in Spain of his promotion, granted by the Spanish Society of Maxillofacial Surgery (SECOM). Dr Blas also has a Master's Degree in Aesthetic Medicine with honors and an Official Master's Degree in Research Methodology in Health Sciences from the University of Córdoba  and is a University Expert in Pain Assessment and Treatment from the University of Seville.

Among all his specialties, Rhinoplasty surgery stands out, a specific surgery to modify and improve the shape of the patient's nose that consists of first accessing the support of the nasal bone and the cartilaginous structures of the nose, modifying its shape and improving its aesthetics and nasal respiratory function. Until a few years ago, rhinoplasty was a really invasive technique where chisel and hammer were used to sculpt and shape the bones of the nose.

In this sense, the contributions of Dr. Blas García have revolutionized cosmetic surgery nationwide by being a pioneer in the use of the Ultrasonic Rhinoplasty Technique     , which works through  piezoelectric terminals that emit ultrasonic waves at a certain frequency, thus being a minimally invasive technique for the patient.

Thanks to the technology of this innovative technique, it is possible to mold the bone of the nose with greater precision and allows to correct different defects without the appearance of possible fractures. In addition, less trauma is achieved, minimizing the side effects of the operation, which until now was one of the main drawbacks of this type of intervention. "No other nasal structure is damaged, such as the mucosa, nose muscles or blood vessels. The bruises under the eyes disappear, the inflammation is much less than with conventional techniques, the bleeding is zero, the precision of the cuts on the nasal bones is much greater and, above all, it allows rhinoplasty surgery to be performed on an outpatient basis, under local anesthesia, without the need for hospital admission, "explains the doctor.

This surgery corrects not only any aesthetic deformity of the nose, but also functional problems. More than 80% of the patients treated  by  the doctor have significant functional alterations in nasal breathing that require additional techniques such as septoplasty and radiofrequency of turbinates to correct deviations of the nasal septum.

Hundreds of patients from all over the world come to Dr. Blas García to correct facial aesthetic details with the new technique of Ultrasonic Rhinoplasty. The results obtained with this technique are more stable and aesthetically more natural than those of a classic surgery, with a much faster recovery for the patient, being able to recover their usual routine in a much shorter period of time. In addition, Dr. García emphasizes the importance of personalizing each case and making it unique: "My patients appreciate the great naturalness of the results. In every rhinoplasty, this is my fundamental goal. The patients who are treated by me  are always looking for a result as natural as possible, and with proportions and harmony as perfect as possible always in consonance with their facial features..

Currently the doctor consults in his own center (Clínica Dr. Blas García), in Santa Cruz deTenerife and performs his interventions at the Hospital Parque and Clinica Tara in Santa Cruz de Tenerife. Two centers which are a reference in  surgical procedures in the Canary Islands, which offer their patients all the guarantees of professionalism and accessibility.