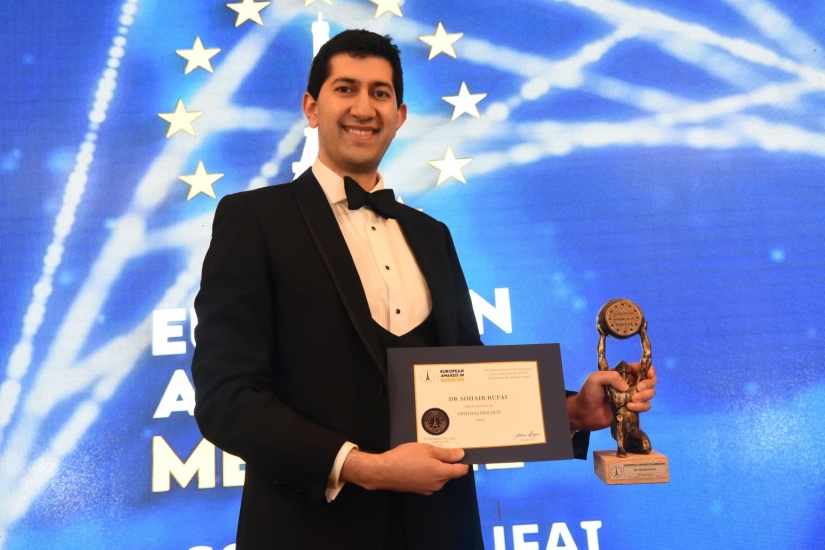 Dr Sohaib Rufai is an Honorary Lecturer and Academic Specialist Registrar in Ophthalmology. He recently completed his NIHR Doctoral Fellowship at Great Ormond Street Hospital, London, and the University of Leicester, UK. He is also Honorary Senior Research Fellow at UCL Great Ormond Street Institute of Child Health, and Honorary Fellow at Oxford University Hospitals. His main research interest is the application of advanced ocular imaging to improve clinical outcomes in patients with rare diseases, including nystagmus and craniosynostosis. He has over 70 peer reviewed publications and prizes.

He is the lead investigator for the RIO Study (Recognition of Intracranial Hypertension in Children using Handheld OCT), for which he was recently awarded an NIHR Doctoral Fellowship grant of £426,000.

He was the lead investigator in the world’s first study using handheld OCT to predict future vision in infantile nystagmus, published in Ophthalmology (2020), the highest impact clinical journal in the field. He completed this work at Leicester Royal Infirmary, as the top ranked candidate for the most competitive NIHR Academic Clinical Fellowship in Ophthalmology in 2016-2019.

Dr Rufai is the author of two books: A Practical Guide for Aspiring Ophthalmologists (World Scientific, 2021), an Amazon ophthalmology bestseller in May 2021, and MCQs for FRCOphth Part 1 (Oxford University Press, in production).

Dr Rufai qualified in 2014 with BMBS and BMedSc (Hons) from the University of Southampton. He subsequently completed NIHR Academic Foundation and NIHR Academic Clinical Fellowship posts – during the latter he obtained MRes with distinction in 2019. Dr Rufai’s work has been covered in the national media including major newspapers, ITV News, Daybreak, BBC Radio 1, BBC Newsbeat and others. He has been invited to present his work internationally in 18 cities.